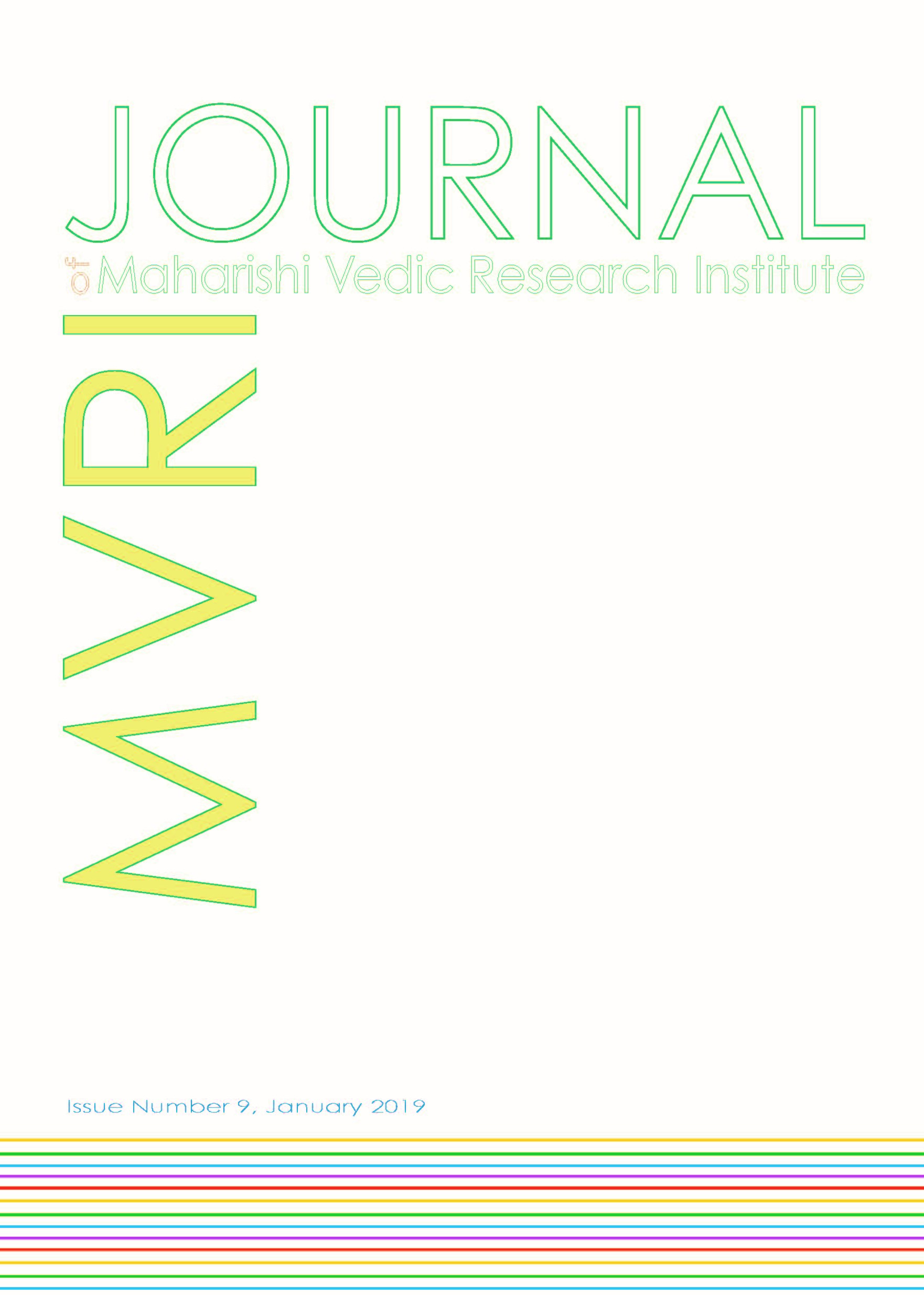 JMVRI Issue Number Nine begins by presenting Maharishi’s Absolute Theory of Defence: Sovereignty in Invincibility, and important statement on the philosophy of invincible defence, by Maharishi Mahesh Yogi. The second paper presents a study of the Maharishi’s plans, programs and events to create world peace. Lastly, the third paper analyses the shift in U.S.-Soviet relations during the Cold War in relation to the group practice of technologies of consciousness.

My philosophy of defence has its beginnings before creation where the unmanifest Absolute is an invincible continuum. The absolute foundation for defence is on this level of invincibility. Invincibility is the unique property of the field of absolute pure existence, or pure consciousness—Transcendental Consciousness. This eternal field of absolute pure existence, or pure consciousness, is a non-changing, eternal, indestructible field of pure intelligence. It is the home of all the Laws of Nature, the Unified Field of Natural Law—Saṁhitā of Ṛk Veda—the Constitution of the Universe—responsible for the administration of the entire universe. Nothing can disturb or disrupt the coherent, holistic, integrated structure of this transcendental field of pure existence—self-referral consciousness—since everything that exists is an expression of its own self-interacting dynamics. By virtue of its absolute coherence, integrated structure, and self-integrating dynamics within itself, the field of pure existence, or pure intelligence, or pure consciousness, is absolutely free from any disturbance, and spontaneously disallows any disturbance in its structure, eternally preserving its indestructibility.

When through the practice of my Transcendental Meditation individual awareness gains the state of this Transcendental Consciousness, the invincible coherence of the field of pure existence begins to be expressed in every impulse of thought and desire, and in every aspect of physiology and behaviour. The individual gains indomitable strength, perfect health, and complete fulfilment of desires through the support of Natural Law.

The Maharishi Effect creates an invincible armour of defence for the nation, which can never be penetrated by any outside negative influence. When any nation gains invincibility through the Maharishi Effect, it will begin to radiate a nourishing influence of harmony and order to every other nation, creating a rise in positivity and coherence in world consciousness. As a result, friendliness will be generated in every other nation, and the very birth of an enemy will be averted. The nation will gain victory before war. When the national consciousness of every nation rises in coherence through the technologies of my Vedic Science, every nation will gain invincibility and war will become impossible.

When one per cent of the world’s population practises my Transcendental Meditation Technique, or the square root of one per cent of the world’s population practises my TM-Sidhi Programme of Yogic Flying, the entire world consciousness will become coherent. The whole world will become immune to disturbance or disruption of any kind, and world peace will be assured. Every nation will be protected by the almighty, invincible power of Natural Law. With the achievement of world peace, no nation need fear an enemy. Every nation will blossom in the values of orderliness, harmony, happiness, creativity, prosperity, and progress. All the energies of the world will be used to raise individual and collective fulfilment to the highest possible level—the creation of Heaven on Earth.

Part I of this two-part series of research papers1 sought to identify the main themes of world peace as proposed by Maharishi Mahesh Yogi through an analysis of his published literature from 1957 to 2015. Part I noted that Maharishi wrote extensively of individual and collective peace, including analyses of the nature and origins of peace, the relationship of individual peace to world peace, the contribution of individual consciousness to collective consciousness, the nature of ‘invincibility’ and its relation to peace in social, physical, and biological systems, and the role of stress in creating disharmony and imbalance in world consciousness. Maharishi also encouraged neurophysiological and social science research on stress and coherence, and presented a ‘Philosophy of World Peace’, a list of ‘Fundamentals of World Peace’, and several versions of his ‘Absolute Theory of Defence’, which collectively represent a wealth of theoretical and quantitative information on the topic of peace. This Part II, which should be read in conjunction with Part I, builds on the foundations of the first paper by examining the plans, programs, and events that Maharishi designed and implemented over a 50-year period to not only operationalize his theories and philosophies of world peace, but also to provide demonstrable evidence of their effectiveness when activated through technologies and applied social welfare initiatives. As in Part I, this Part II draws from an archive of published documents by or attributable to Maharishi.

Warming U.S.-Soviet Relations During the Cold War as Measured by U.S. Presidential Statements: Impact of the Group Practice of the Transcendental Meditation-Sidhi Program

Currently, 25 empirical articles published in independent peer-reviewed journals or in scholarly conference proceedings have reported that the collective, or group, practice of the Transcendental Meditation and TM- Sidhi program enhances the societal quality of life and reduces violence, conflict, and war. The present study retrospectively investigated the impact of this program on U.S.-Soviet relations during the Cold War era, as reflected in public statements of U.S. President Ronald Regan concerning the U.S.S.R. Such statements are regarded as one of the most sensitive and relevant indicators of superpower relations.

All 478 pertinent statements published in the Weekly Compilation of Presidential Documents from January 1984 to December 1987 were content-analysed by two raters on a peace/war rating scale. Time series, impact-assessment analyses established that the quartile distributions of the number of participants in the group practice of the Transcendental Meditation-Sidhi program had a significant relationship with the weekly average ratings of the presidential statements at lags 3, 5, and 8 (p = .0005), with positive total impacts (steady state gain) beyond the second and third quartiles. Weekly ratings totals showed significant impacts at lags 0 and 3 weeks (p = .0018), with a positive steady state gain when the number of participants was above the second or third quartiles. Statistical assumptions of the analyses were satisfied and competing alternative explanations could not plausibly account for the findings. The results of the analyses also supported a causal interpretation. The findings of the current study thus lend support to the hypothesis that the U.S. president’s statements about the U.S.S.R. would be significantly more positive and harmonious during and shortly following weeks when the number of group participants was larger.