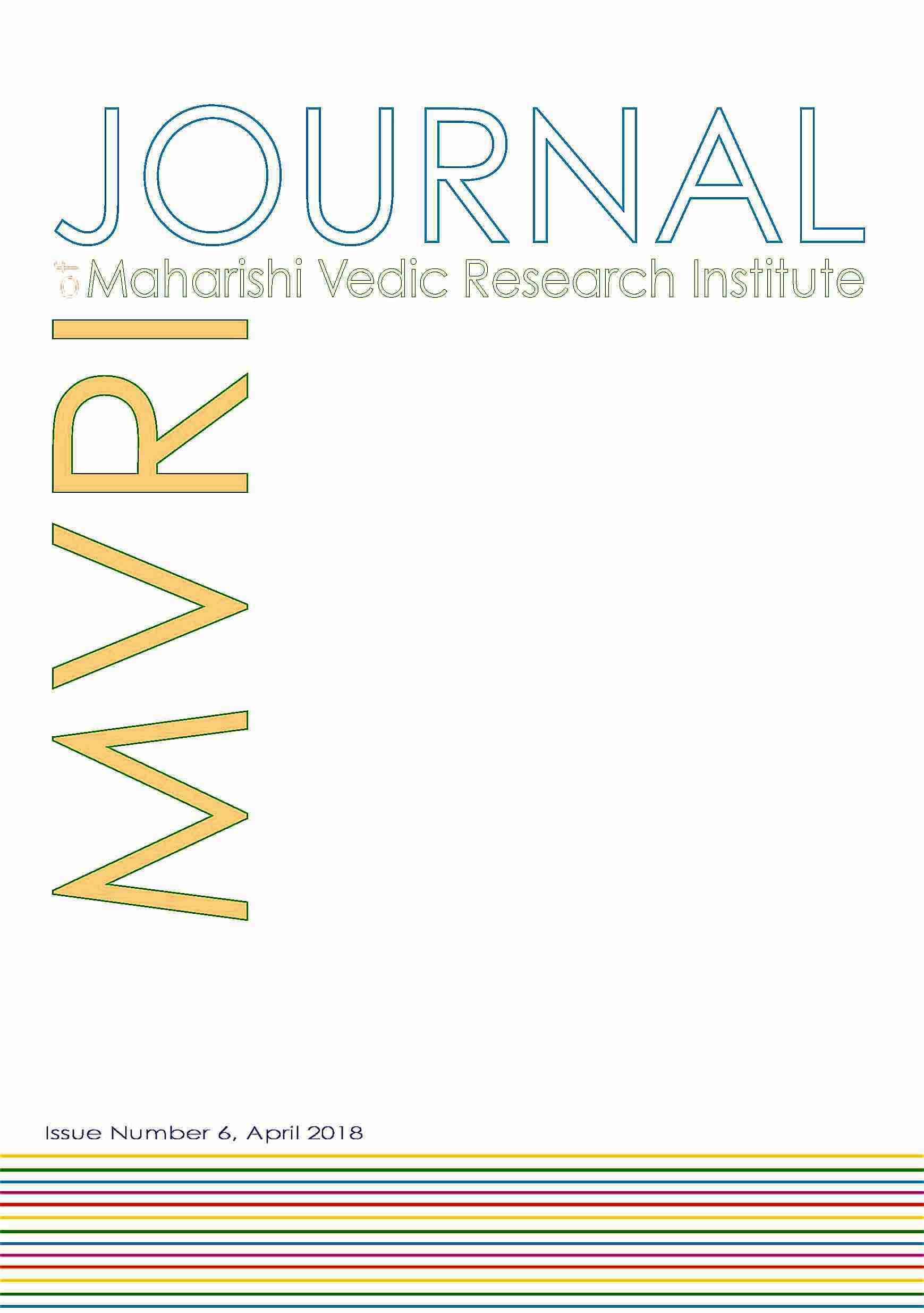 JMVRI Issue Number Six is a special issue on the theme of peace, beginning with a paper resenting Maharishi Vedic Science and Technology as the means to create permanent world peace. This is followed by a literature review and thematic analysis of Maharishi’s life-long work establishing foundational principles and programs for peace, which is followed by an article examining the contribution of Maharishi Vedic Science in creating peace in individual life.

Wars in the Middle East and conflicts throughout world history display the failure of government leaders to achieve peace, either at the negotiation table or on the battlefield. It is a failure that will continue without end if the existing methods of attempting to create peace are the only ones tried. Indeed, government leaders have repeatedly ignored knowledge of a peace-creating technology that has been available to them for over 50 years. The Vedic Science and Technology of Maharishi Mahesh Yogi includes the theoretical understanding and applied methodologies to create peaceful individuals and collective peace in society and in the world. The technologies of Maharishi Vedic Science provide the direct experience of Transcendental Consciousness, the silent, settled state of awareness, which is the state of inner peace and harmony.

The quantum physicist Dr John Hagelin (1987) has analyzed the nature of the experience of Transcendental Consciousness and found that it is in fact identical with the unified field of natural law described by quantum field theory. Maharishi explains that the loss of intimacy and familiarity with this unified field of natural law is the cause of all suffering in life. When individuals have no contact with the unified source of all the laws of nature in their own consciousness, they violate the laws of nature, which causes stress and strain in the individual. Accumulated stress in the environment created by millions of stressed individuals eventually erupts into war or other disasters. The ability of individuals to contact the unified field of natural law and create peace for themselves and for others has been verified by published scientific research over the past 48 years. The field effect of consciousness created by these individuals has come to be known as the Maharishi Effect, in honour of Maharishi who predicted it more than 50 years ago. What is necessary, and urgent, is to establish peace in the world by creating this field effect of consciousness on a global scale.

The requirement: the gathering—in India and in other countries—of groups of 8,600 world peace professionals (the square root of one per cent of the world’s population) together practicing the Maharishi Transcendental Meditation and TM-Sidhi program, including Yogic Flying, to create the Global Maharishi Effect. These gatherings will spread indomitable waves of peace and harmony in the environment and secure permanent peace in the family of nations, and thereby change the course of human history.

A cursory review of publicly available literature suggests Maharishi Mahesh Yogi dedicated a significant portion of his life to articulating theories and principles of world peace and working tirelessly towards applying them. From 1955 onwards, he wrote extensively on the topic of individual and collective peace, including analyses of the nature and origins of peace, the relationship of individual peace to world peace, the contribution of individual consciousness to collective consciousness with a focus on the phenomenon of ‘coherence’, the nature of ‘invincibility’ and its relation to peace in social, physical and biological systems, and the role of stress in creating disharmony and imbalance in world consciousness as they manifest in violence, terrorism and war.

Maharishi also presented his ‘Philosophy of World Peace’, his ‘Fundamentals of World Peace’, and several versions of his ‘Absolute Theory of Defence’, and he published specialist white papers on world peace directed to the United Nations and other international organizations like UNESCO and the World Health Organization. He even commented on speeches by world leaders, such as those of Leonard Brezhnev, then chairman of the Presidium of the Supreme Soviet of the U.S.S.R., while promoting evidence-based methods and programs for creating peace and launching a global research program to investigate them. In order to capture and codify what Maharishi wrote about peace, this Part I of a two-part series of research papers seeks to identify Maharishi’s main themes of world peace through an analysis of his publications from 1955 to 2015. The paper draws from an archive of 170 published documents by or attributable to Maharishi between those years, using this foundational material to unearth primary sources of the themes and thereby methodically create a framework for comprehending and presenting Maharishi’s views on the topic of world peace across five decades.

Peace and the Individual in Maharishi Vedic Science

In the more than five decades of Maharishi’s teaching of his holistic vision of the Veda and Vedic literature, the theme of peace is central. Maharishi taught that knowledge should be valued not just for its own sake but for the contribution it could make to human life, both individual and collective. In both arenas the search for peace has been perennial. Maharishi offered to the world his Vedic Science and Technology, through which alone this search on every level of human life could find complete fulfillment. Thus, of the Bhagavad-Gītā, which he describes as containing the essence of the ancient Vedic wisdom, Maharishi writes:

“The Bhagavad-Gītā is a complete guide to practical life. It will always be there to rescue man in any situation. It is like an anchor for the ship of life sailing on the turbulent waves of time…It brings fulfilment to the life of the individual. When society accepts it, social well-being and security will result,  and when the world hears it, world peace will be permanent.”

Individual fulfilment, social well-being, security, and world peace are therefore in Maharishi Vedic Science seen as inseparably connected. In one sense modern theories of individual and social life have recognised this connection: peace, security, and social well-being are regarded as preconditions for the development of individual well-being. Maharishi Vedic Science, however, entirely reframes this understanding by viewing it from the fundamental level of Natural Law which governs all life. It explains that through the Technologies of Maharishi Vedic Science peace and fulfilment can be gained by any individual in his or her own right, and that from that secure foundation flows social well-being and world peace. Moreover, it explains that through these Technologies an influence of peace, inclusive of world peace, can be directly created at the collective level, benefiting all levels of international, national, and community life. An extensive international scientific research program of many decades standing has confirmed the practical reliability of these principles. This article reviews central aspects of the theme of peace in Maharishi Vedic Science, with an emphasis on the individual level.