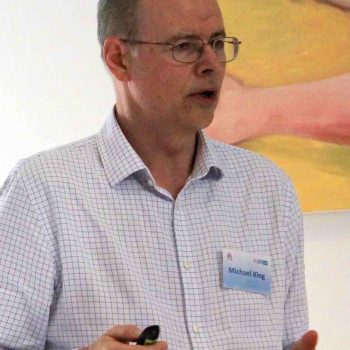 Dr Michael King is a magistrate of the Magistrates Court of Victoria and until recently was Regional Coordinating Magistrate of the Loddon Mallee region. He previously served as a magistrate in Western Australia, serving as Perth Drug Court magistrate and as Armadale Family Violence Court magistrate as well as in general lists. Prior to his appointment to the bench, he practiced as a lawyer in private practice, with Legal Aid WA and with the Aboriginal Legal Service WA, where he represented families before the Royal Commission into Aboriginal Deaths in Custody.

in 2011 he received the Resolution Institute’s Michael Klug Award for his contribution to the peaceful resolution of conflict. He is recognized internationally as an expert on therapeutic jurisprudence and has published extensively on therapeutic jurisprudence, restorative justice, solution-focused judging, and non-adversarial justice. He has also published on the Vedic concept of natural law and the application of the Transcendental Meditation technique to health and offender rehabilitation.