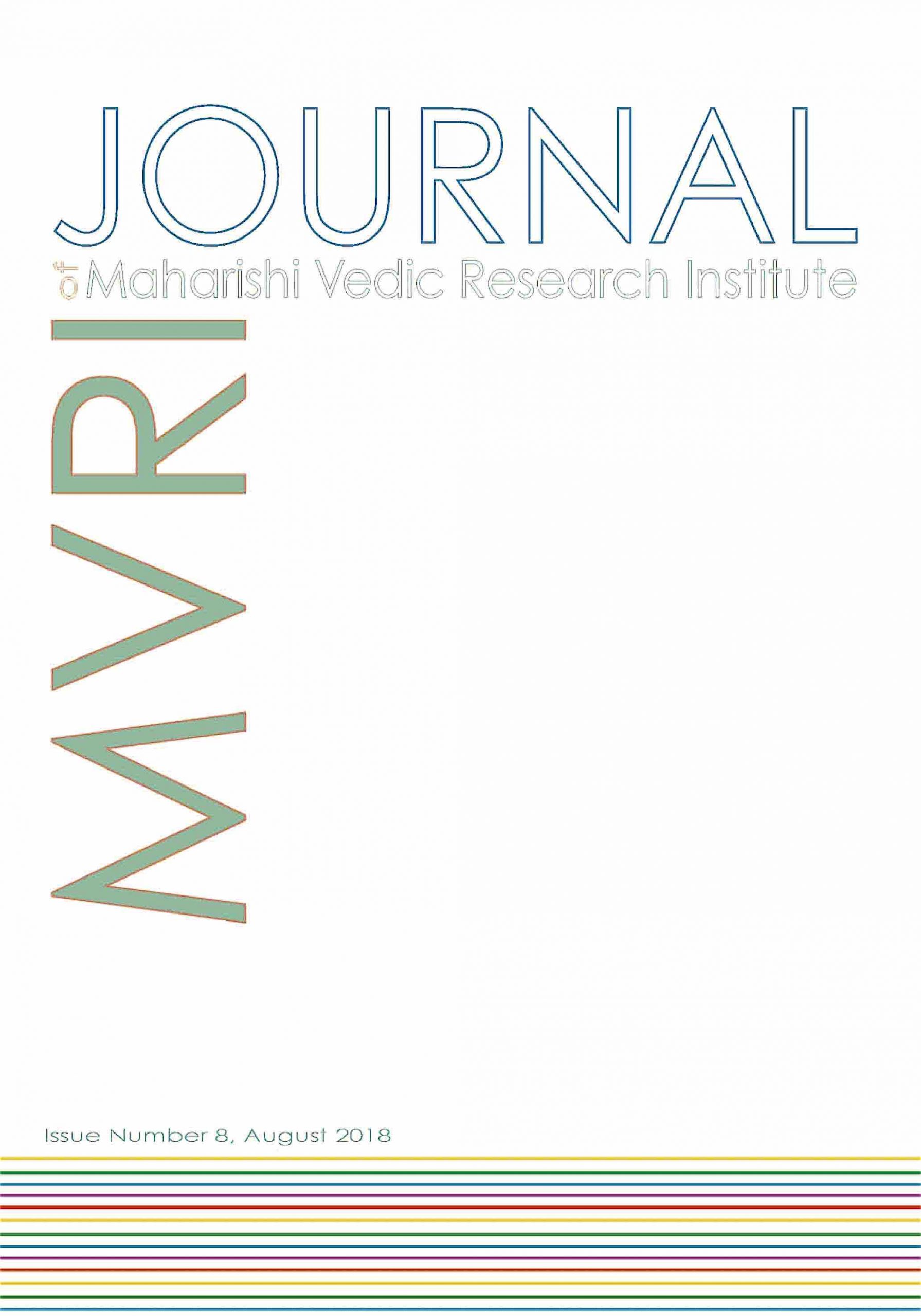 JMVRI Issue Number Eight presents articles on the theme of world peace, with a paper on the global impact of the Maharishi Effect, an influence of coherence from 1974 to 2017, followed by an account of the World Peace Artists initiative to support Maharishi Vedic Pandits and a discussion of Vedic Defence, and, lastly, a paper on the impact of the group practice of Transcendental Meditation-Sidhi program on improved U.S.-Soviet relations.

Global Impact of the Maharishi Effect from 1974 to 2017: Theory and Research

World peace is the urgent goal of Maharishi Mahesh Yogi’s revival of the consciousness-based technologies of ancient Vedic India. Towards this end, Maharishi created a worldwide organisation, founded universities in several countries, and trained over 20,000 teachers of the Transcendental Meditation technique who in turn have taught it to approximately ten million people, which for five decades has increasingly created an influence of harmony in the world. Maharishi’s approach to peace is through creating coherence in collective consciousness, which he holds to be the fundamental force governing the quality of life in society. The individual is the unit of collective consciousness, with each individual contributing to all collective levels—family, city, state, national, and world.

Artists for Peace and Strategies of Vedic Defence: A Prelude to Art Pages

Citation: Bonshek, A. (2018). Artists for peace and strategies of Vedic defence: A prelude to Art Pages. Journal of Maharishi Vedic Research Institute, 8, 81-123.

World Peace Artists was created to support the Global Peace Initiative and Maharishi Vedic Pandits—experts in a range of technologies of consciousness that promote peace. International artists who participated in World Peace Artists, included Elaine Arnold, Sam Adhi, the late Charlotte Cain, Francis Knight, Lynne Marshall, Julie Preminger, Ian Roberts, Rob Schoenfeld, Greg Thatcher, Kuno Vollet, Christian Wharton, Claire Winteringham, and the author. A percentage of sales from artists’ work went to support the peace Initiative, made possible through the Brahmananda Saraswati Foundation. Established by Maharishi Mahesh Yogi, the Foundation is named in honour of Maharishi’s teacher—Guru Dev, Brahmananda Saraswati. Guru Dev, who served as Shankaracharya of Jyotir Math, was the chief representative of the Vedic tradition of knowledge in India in his day. The Foundation supports a peace-creating group of Maharishi Vedic Pandits in central India. Since ancient times, Vedic Pandits have been the traditional custodians of Vedic wisdom responsible for maintaining harmony in society. In reviving the full understanding of Vedic knowledge and technologies of consciousness for reducing negative trends and creating world peace, Maharishi secured the original effectiveness of these technologies, subsequently validated through scientific research. Maharishi Vedic Pandits, skilled experts, are thus able to fulfil their traditional role of creating an influence of harmony, peace, and balance for the global family of nations.

The number of experts required to establish and secure world peace equals the square root of 1% of the world’s population—currently about 8,600 individuals. The Foundation’s goal is to increase to 9,000 Pandits; at present, the existing group of 2,500 is to be expanded to 3,000. While participating artists offered their work through World Peace Artists to support the Global Peace Initiative, these artists also practice technologies of consciousness, enlivening a more peaceful influence in their own lives, in their community, and in society.

This study empirically tests the hypothesis that during the years from 1979 to 1986, the Cold War climate of superpower relations was significantly improved through the reduction of global stress and tension produced by four large groups of experts practicing the Transcendental Meditation- Sidhi program, an advanced aspect of the Transcendental Meditation technique. The number of group participants in these four global ‘World Peace Assemblies’ approached or exceeded the theoretically predicted critical threshold for a global effect: the 1% of the world’s population at that time, approximately 7,000 participants. Consistent with theoretical prediction, time series analysis found a significant increase in cooperation and reduction in conflict for Soviet behavior directed toward the U.S., as measured by monthly content-analyzed event data from the Zürich Project on East-West Relations. The analysis was based on a Box-Jenkins transfer function model that included a binary ‘impact-assessment’ variable to measure the effect of the World Peace Assemblies. Both a significant immediate influence of the Assemblies on Soviet behavior toward the U.S. (p = .0034) as well as delayed effects at lags 2 (p = .0125) and 4 months (p = .00004) were found. The null hypothesis of no effect on Soviet behavior was also rejected by a joint-significance test for the three impact-assessment parameters (p = .0029). The large estimated total impact of the World Peace Assemblies was both practically and statistically significant.

Sensitivity analysis and diagnostic tests found that the impact of the World Peace Assemblies could not be explained by the impact of Mikhail Gorbachev on Soviet foreign policy, seasonal or other cycles in Soviet behavior, or pre-existing trends (including the ‘spurious regression phenomenon’). While sensitivity analysis found a significantly positive Gorbachev influence on Soviet behavior (p = .00004), the positive effect of the World Peace Assemblies remained highly significant and was 1.7 times larger than the Gorbachev effect.