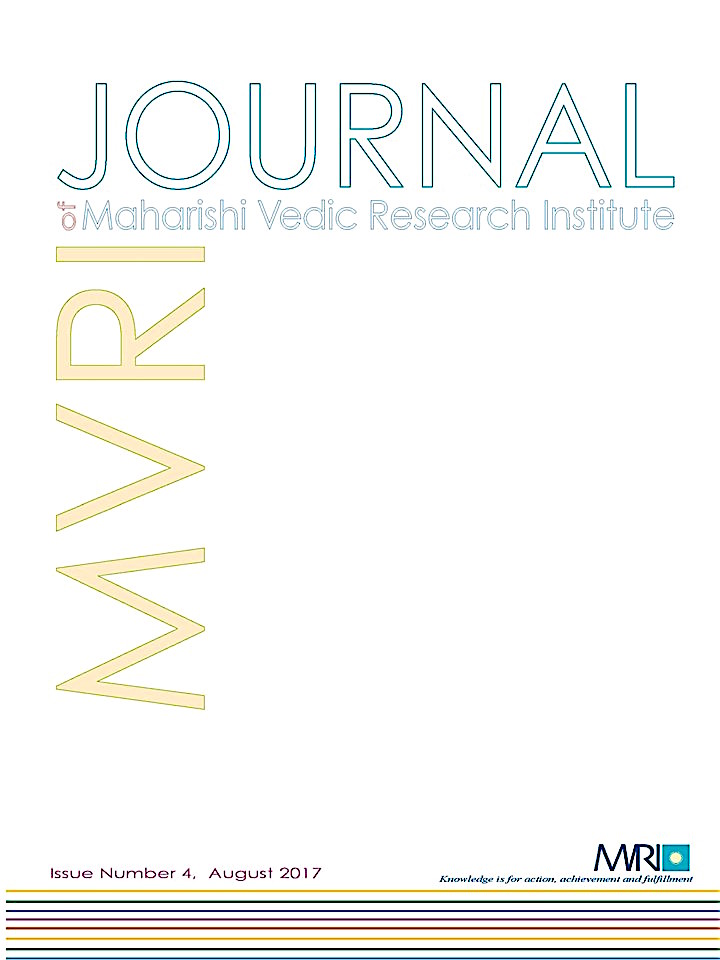 JMVRI Issue Number Four has three articles that separately cover topics from Yog, education, and management. The leading paper, referring to the Bhagavad-Gītā, discusses Maharishi’s teaching on Yoga—distinguishing Yoga as a practice and Yoga as the experience of higher states of consciousness. The following paper considers the concept of ‘support of nature’ as a management tool. Finally, the last article looks at the contribution of consciousness-based education in addressing the wicked problems of sustainability.

A recurrent theme throughout Maharishi Mahesh Yogi’s commentary on the Bhagavad-Gītā is the distinction he makes between Yoga as a practice and Yoga as the experience of higher states of consciousness. In Maharishi’s view, modern commentators and Yoga teachers habitually mistake descriptions of the state of Yoga for the path of Yoga, leading to a variety of practices, attitudes, and philosophies that have been detrimental to the pursuit of enlightenment.

Maharishi’s point is more than philosophical, for he has demonstrated that the experience of Yoga, termed Samādhi in the language of Yoga philosophy, can be simply and effortlessly attained through his Transcendental Meditation program, whereas practices requiring effort, concentration, attitude changes, etc.—prevalent today under the name of Yoga—are based on mistaken interpretations of the Bhagavad-Gītā, and often inhibit the progress of aspirants to higher states of consciousness.

Such interpretations have arisen because philosophers and scholars in recent centuries have derived their commentaries from textual exegesis and philosophical argument, whereas Maharishi’s is based upon the direct experience of Samadhi, the inner Self. The experience of Samādhi through Transcendental Meditation practice has led to scientifically verifiable improvements in individual and collective life that confirm Maharishi’s interpretation.

This paper highlights passages from the Bhagavad-Gītā and contrasts Maharishi’s interpretation of them with several representative commentaries, to illustrate how Maharishi’s analysis corrects fundamental misunderstandings that have arisen in modern Yoga philosophy and practice, and how his teaching brings to light the practicality of the Bhagavad-Gītā.

Citation: Kendz, S., & Heaton, D. (2017). A qualitative exploration of support of nature as a tool of management. Journal of Maharishi Vedic Research Institute, 4, 45-73.

Maharishi Mahesh Yogi has explained that with ‘Support of Nature’ individuals find desires and wishes are fulfilled in a way that seems to be caused by fortunate coincidences—that circumstances come about without their direct action, to fulfil their desires. Maharishi has extolled Support of Nature as a consciousness-based management tool to ‘do less and accomplish more’ in fulfilling personal desires and professional goals; Support of Nature, Maharishi has said, can be cultivated through the Transcendental Meditation and TM-Sidhi program.

Subjects who were long-term, twice-daily practitioners of this program who were residing in Fairfield, Iowa were selected to partake in qualitative, semi-structured interviews about their personal experiences of more effortless fulfillment of desires. Six of the 18 subjects were senior executive officers (SEO) of the international Transcendental Meditation program. The remaining 12 were active participants of the Invincible America Assembly, an organization founded by Maharishi to establish world peace.

All subjects reported experiences of Support of Nature and that the frequency, timeliness, and meaningfulness of fulfillment of desires had increased over time with continued practice of the Transcendental Meditation and TM-Sidhi program. When describing their inner experiences associated with Support of Nature, subjects reported being in a quiet and relaxed state of mind.

When findings were analysed with reference to a model of levels of the mind, it was noted that in fulfillment of desires through Support of Nature, subjects primarily talked about the higher Self—Pure Consciousness; while the ego, intellect, and thinking mind were not much mentioned. We conclude that the Support of Nature phenomenon merits further conceptual, empirical and practical consideration in the field of management.

Addressing the ‘Wicked Problems’ of Sustainability through Consciousness-Based Education

In order to imagine and then create a sustainable future, education will have to be significantly rethought and redesigned. Starting from the United Nations’ 2030 Agenda for Sustainable Development, we tackle the competencies, and then the curricula and methods, that education will have to adopt in order to successfully pursue this agenda. After identifying outstanding issues in competencies, curricula and methods, we introduce a new agenda for education structured around developing the consciousness of the knower, or learner, as a basis for improved teaching and learning.

This new agenda, which addresses several of the issues of Education for Sustainability, is called Consciousness-Based Education, first introduced by Maharishi Mahesh Yogi in the early 1970s. At the end of this paper, we present a model that integrates the development of consciousness into higher education for sustainability.