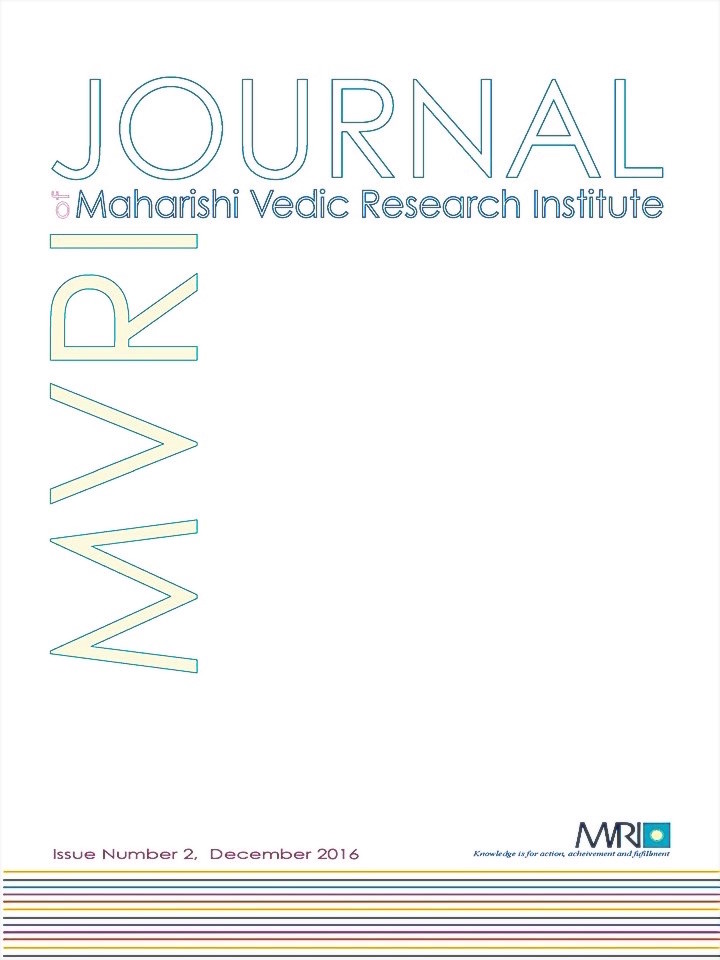 JMVRI Issue Number Two includes three papers that were originally presented at the MVRI First Regional Conference on Maharishi Vedic Science: Atma—Ved—Vishwa—Brahm. The first paper presents a deep reading and research of the book Maharishi’s Absolute Theory of Government, the second examines the value of the practice of Transcendental Meditation for the health disorders and diabetes mellitus. The third article presents the impact of Maharishi Vedic University in Cambodia on the nation’s economic and social indicators from 1980 to 2015.

Reading and Researching Maharishi’s Absolute Theory of Government: Part I

This paper presents an approach to reading and researching Maharishi’s Absolute Theory of Government, which is a comprehensive published presentation of Maharishi Vedic Science. The first section of the article presents Maharishi’s teaching on the more general question of the role of understanding in the path to enlightenment, a theme which is then applied to reading and researching this book. The focus is then on the higher-level structural organisation of the book’s themes, both through the unfolding of sections and themes in the main text, and through the parallel stream of knowledge presented in the footnotes. Particular attention is given to the first part of the book, in which most the main themes of the book are introduced, and in which many of the key terms and concepts of Maharishi’s Absolute Theory of Government are defined and discussed.

A pandemic of type-2 diabetes threatens to bankrupt Western industrialized nations. In 2012, in the United States alone, more than 22.3 million people (about 7 percent of the U.S. population) suffered from the disease at an estimated cost of $245 billion. Prevention has so far focussed on dietary manipulation and exercise. On completing this paper the reader will have gained practical knowledge of the significant contribution that Transcendental Meditation and its associated techniques from Maharishi Ayur-Ved can make in extending these measures to a more global prevention strategy.

This descriptive research paper examines the impact of Vedic Science- based education on the economic and social development of Cambodia between 1980 and 2015. Specifically, the long-term impacts of a large- scale social renewal and healthcare program begun in 1992 and the establishment of an innovative university, called Maharishi Vedic University, at the beginning of 1993 are considered using the Social Impact Assessment model.

Prior published research, both in Cambodia and elsewhere throughout the world, has suggested that the applied programs of Vedic Science can play a vital part in personal, social and educational renewal and in the removal of poverty. In Cambodia, ranked the poorest country in the world in 1992, the contribution of Vedic Science-based education has been significant, not only in the lives of thousands of students but also in the welfare of the broader community. For example, research has found that a Vedic Science-based approach to higher education in Cambodia increased non-verbal intelligence, reduced anxiety, depression and the symptoms of post-traumatic stress disorder, and improved the general health of university students when compared to students at other universities.

It has also been shown that in the 1990s, 70 nations sought to change their systems of government to multi-party democracy. Of these, 33 nations did not experience war either before or after their transition to democracy, nine had civil war both before and after elections, and 26 nations had no war prior to democratic elections but bloody civil conflict soon thereafter. Only three nations out of 70 during this period had war before, but peace after, democratic elections—Cambodia, Mozambique and Namibia. All three of these countries benefited from intervention of Vedic Science-based education, health and social-welfare programs. This paper explores the economic and social impact of this phenomenon in Cambodia beginning in the early 1990s with the establishment of a “coherence-creating group” of students at Maharishi Vedic University.